Knee high by the 4th of July???  Not in Georgia.  We picked our corn this weekend.  Last year the corn only grew 2 feet before it died so it's definitely an improvement.  Last fall I left the turkey pen in a corner of the yard until they killed all the grass and "fertilized" the soil well.  I then moved their pen forward and repeated the process.  We did this for 4 squares which gave us a 20x20 plot to plant the corn in.  I used the old wheel plow the neighbor gave me to till it up.  The only thing I did after planting it was to throw down some blood meal a few weeks after it germinated.  About 3 weeks ago we had a big storm come through that blew about 1/2 of it over.  Some I could stake back up and some was just lost.  Here are some pics from the harvest. 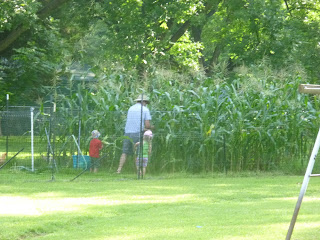 The kids and I start picking in the 20x20 block. 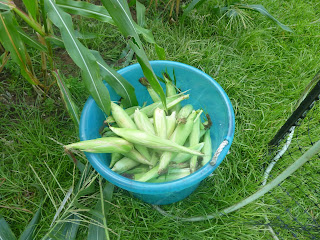 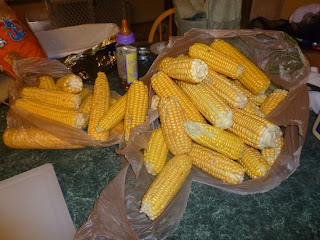 What was left after cleaning them and discarding those that were too bug infested, not pollinated well , or just nasty looking.  The chickens will eat the ears that we didn't want. 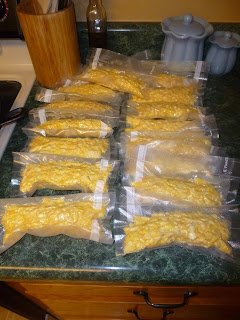 The final score.... 16 bags of corn cut off the cob, ready to go into Danielle's casseroles.

There are still some late arrival ears in the patch so we may get a bit more but I'm not counting on much more this year.  At least we found out that it is possible to grow sweet corn here.  It just has to happen a LOT earlier than in Illinois.