With my bee gloves repaired, a day off of work, the nectar flow right around the corner, and temperatures in the high sixties it was time to inspect the hives today.  I watched Thom Carey's "My Hive Tool" videos and really wish that I had bought it when I first started keeping bees.  It follows him through an entire year of bee keeping, from package installation through the harvest.  It was highly informative on just about everything that a beginner bee keeper would need.  Available from amazon at the link at the bottom.  Anywho, enough of the review. 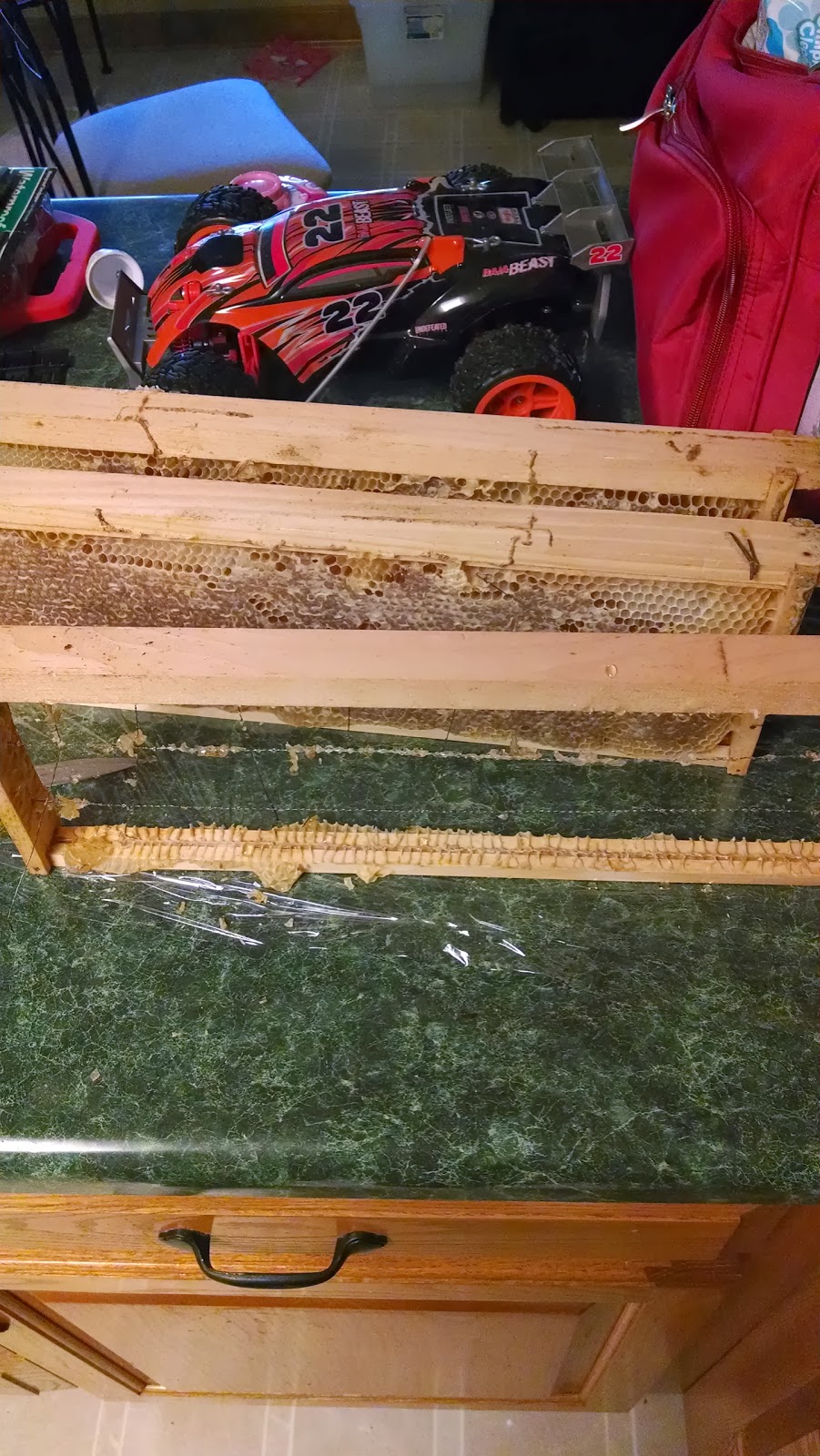 While I know that one normally wouldn't rob their hives in January, and I'll probably get an ear full about how it shouldn't be done; I have a few reasons that I took honey in January.  1) The strong hive still had 11 full frames of honey.  Last fall I left them everything because it was my first year and I wasn't sure how much they needed.  After robbing they still have a full super of honey, which I may rob again if the nectar flow starts soon. 2) The nectar flow is starting soon and I'm already feeding the weak hive.  If the strong hive gets weak before the flow I'll feed them also.  3) Danielle wanted honey! 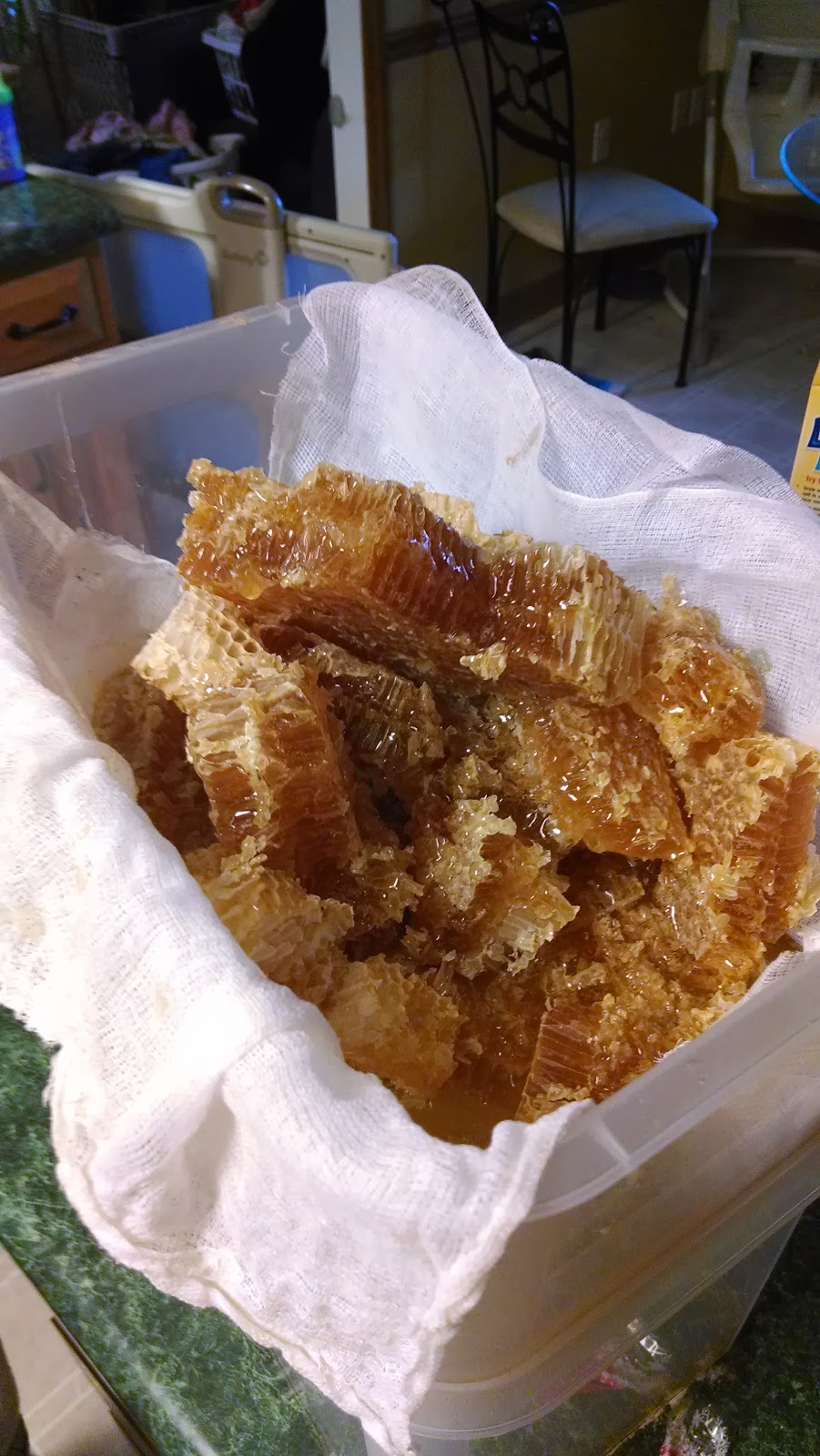 I did learn that if you are planning on doing the crush and strain method you should't wire them in.  It was a real pain getting the comb out of the frames with all the wires.  I had used crimp wire foundation and wired it in horizontally.  Letting them build it themselves would have been a simple zip with a knife around the frame and pop out of the comb.  I also don't have a honey strainer yet so we used cheese cloth.  It was adequate for us, but I wouldn't try and sell any.  People get all bent out of shape when they see bee legs in their honey. 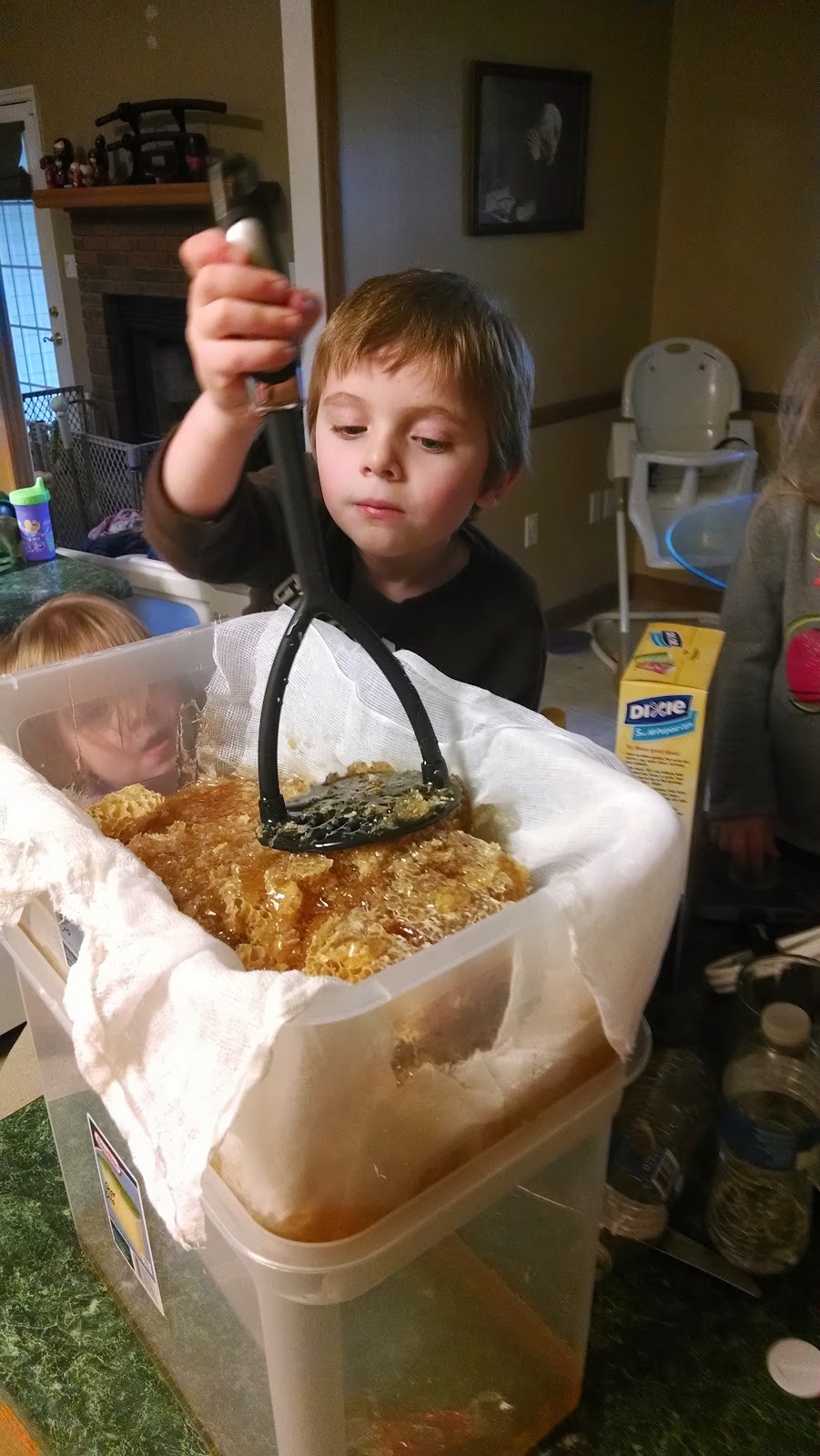 I went to Fred's (a local dollar store) and bought two Rubbermaid containers that stacked together nicely.  Holes were drilled in the bottom of the top box and it was lined with cheese cloth.  After fighting the comb off of all the wires it was put in the top box and my assistant crushed it up with a potato masher. 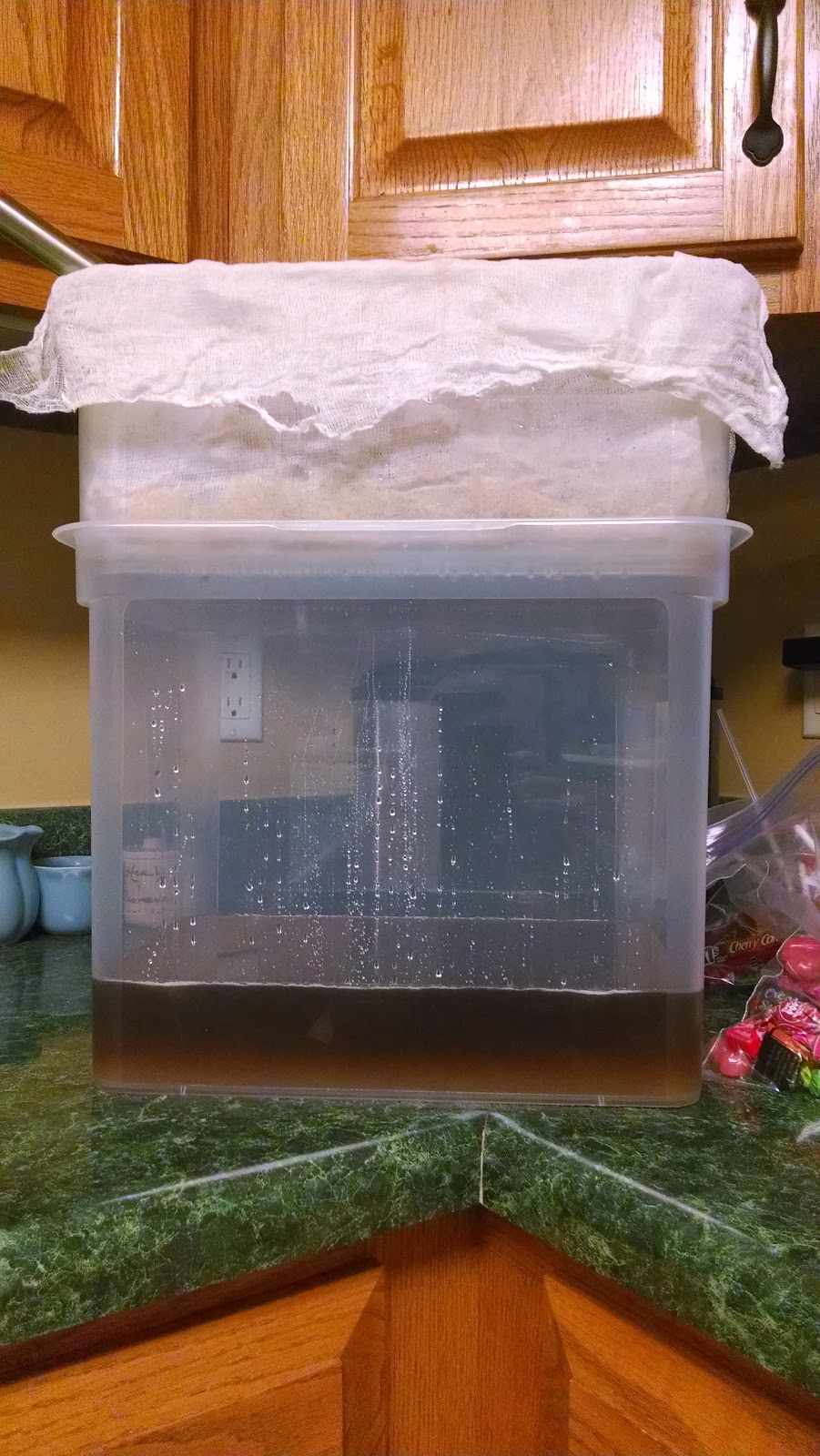 It was then left to drip for 24 hours.  I checked it in the morning after about 12 hours and noticed some chunks of comb that were missed.  I crushed those, stirred up the wax and let it sit another 12 hours to drip. 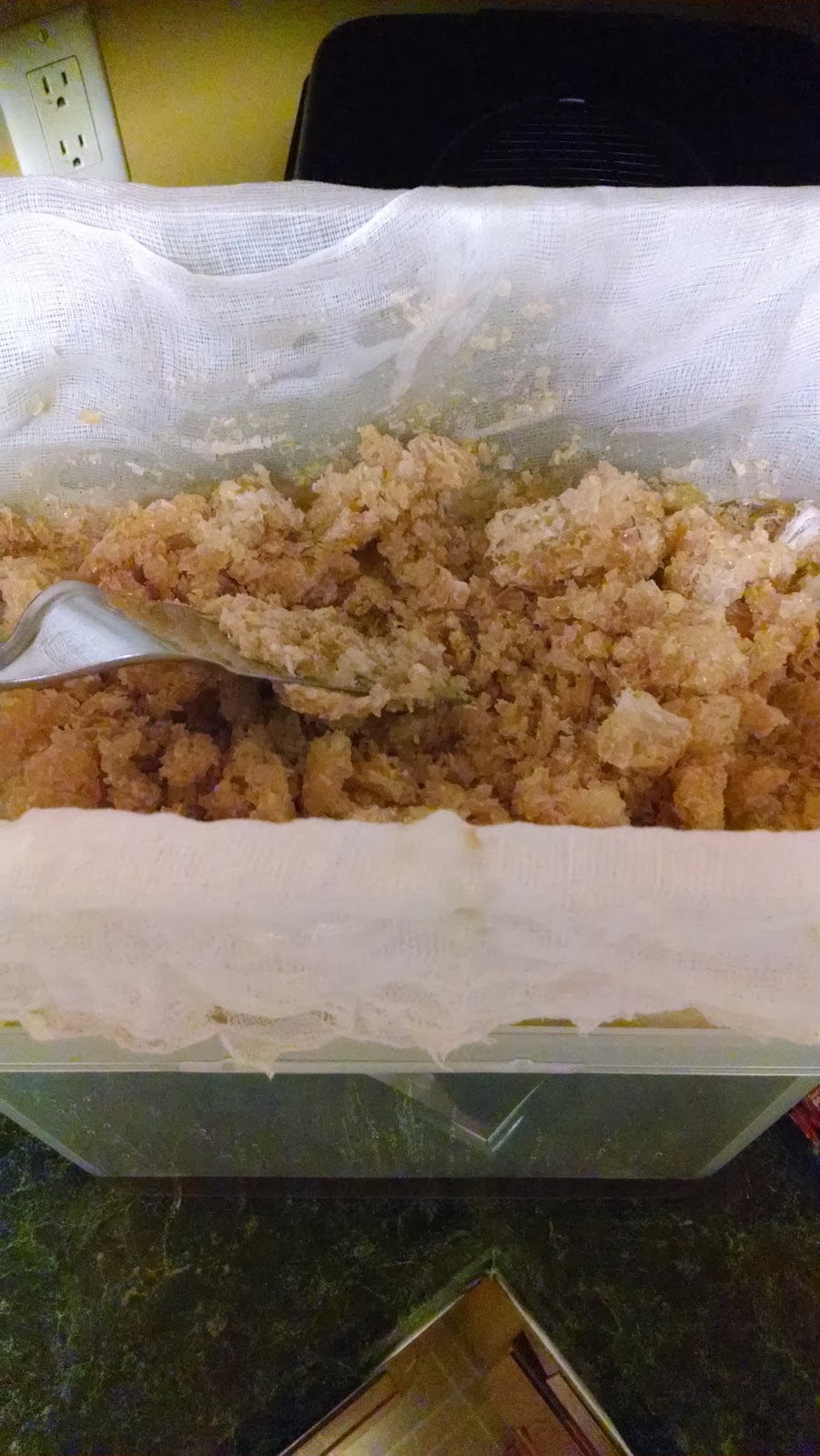 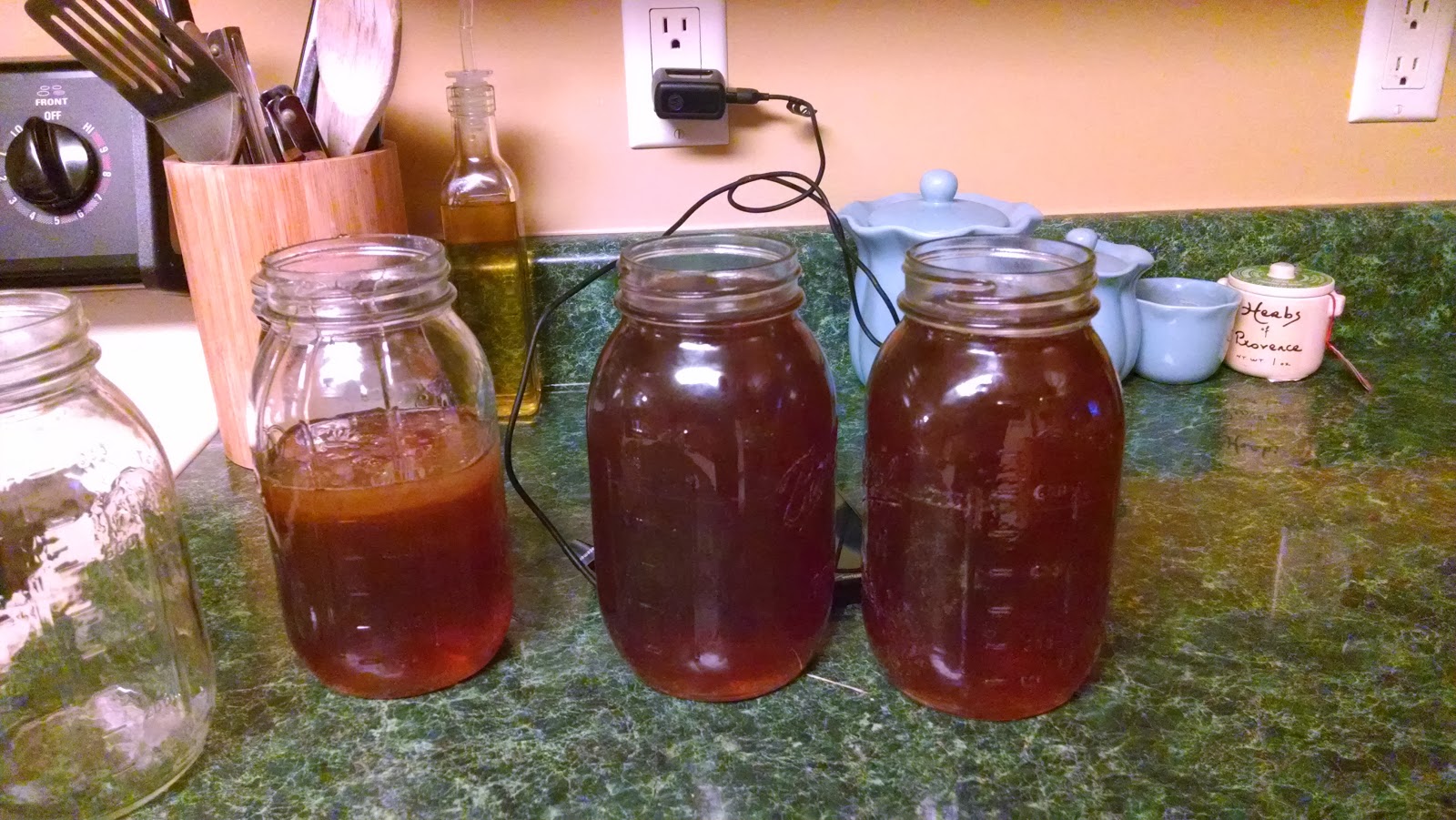 The frames were about 80% full so we got 2 1/2 quarts.  It looks like one medium frame will equal one quart if the frame is full.  It's kind of tangy, most of it is from cotton and goldenrod that bloomed last fall.  Over all though we're excited about our first honey harvest.  The 1/2 jar is all the impurities that a proper strainer will clean out.  I may strain it again once I get a screen (if it lasts that long).

The temperature tomorrow is to be in the high sixties.  That means it is time to do a hive inspection.  For Christmas I got a real bee suit and gloves.  It's a great suit and the gloves go all the way past my elbows.  However, after I was in the hive a few weeks ago I noticed a slight but crucial problem. 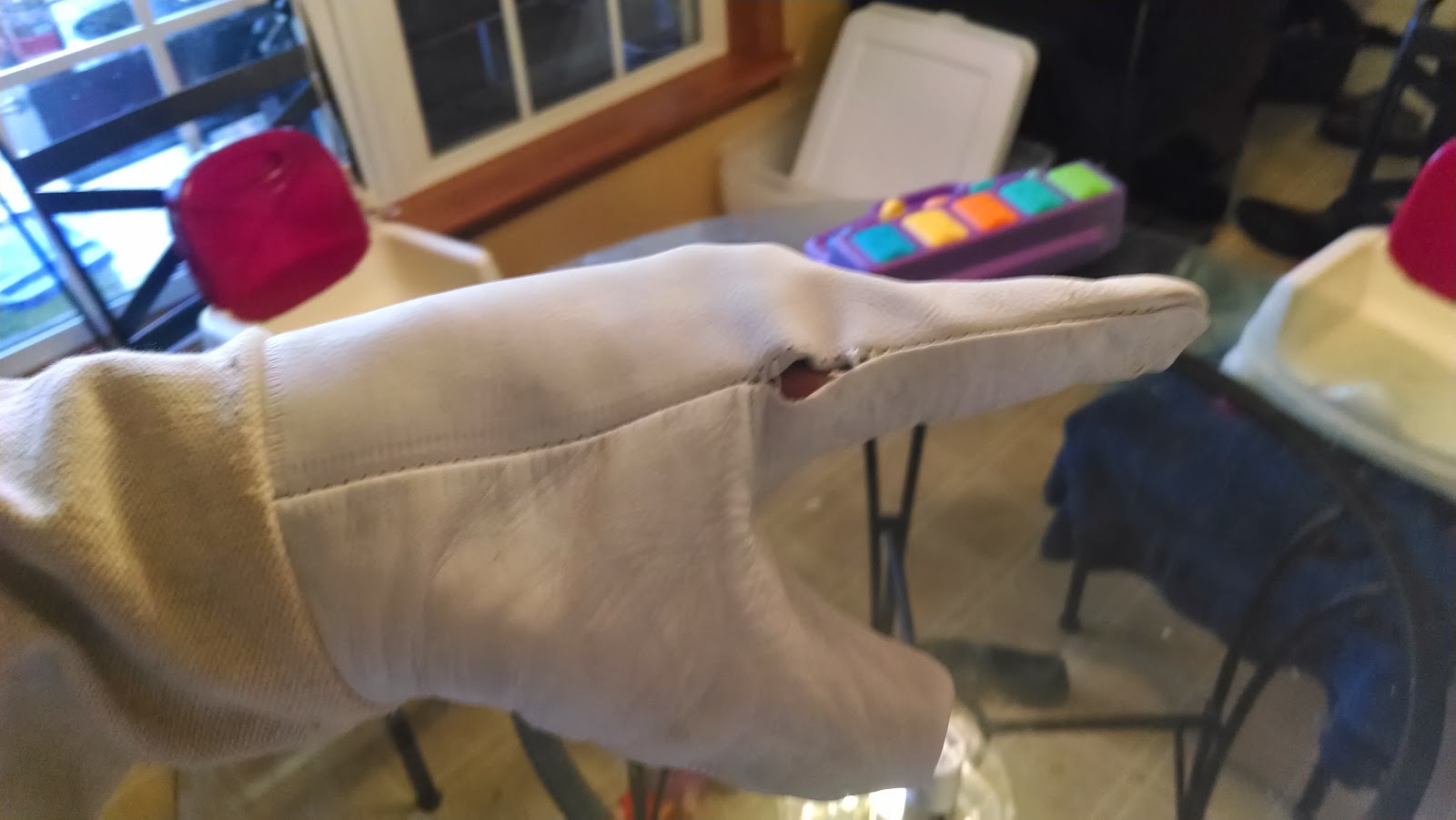 The sewing machine dropped it's thread or something and I had a nice gaping hole. 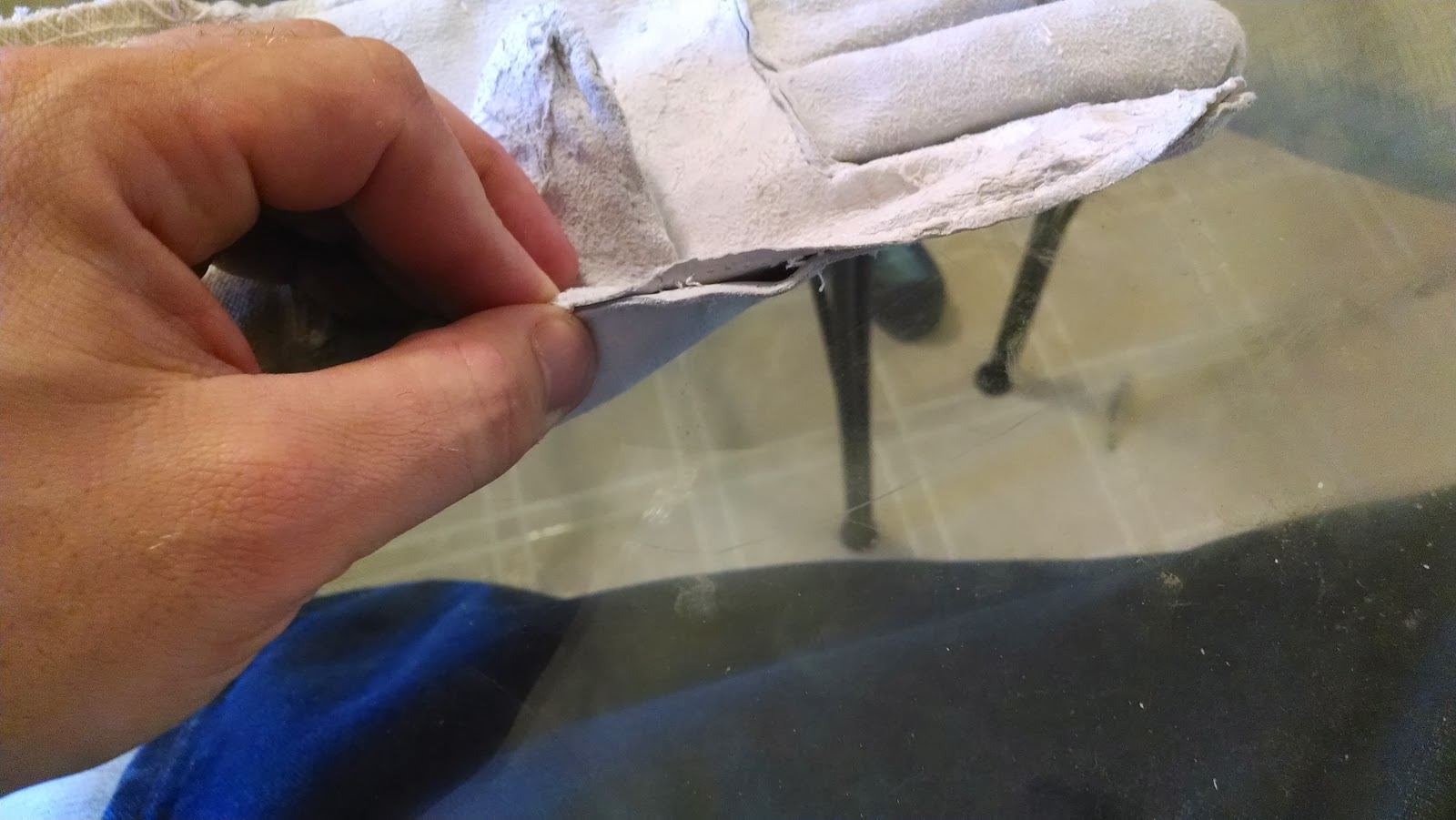 A quick turn inside-out and I could see that the holes from the machine were there but no thread. 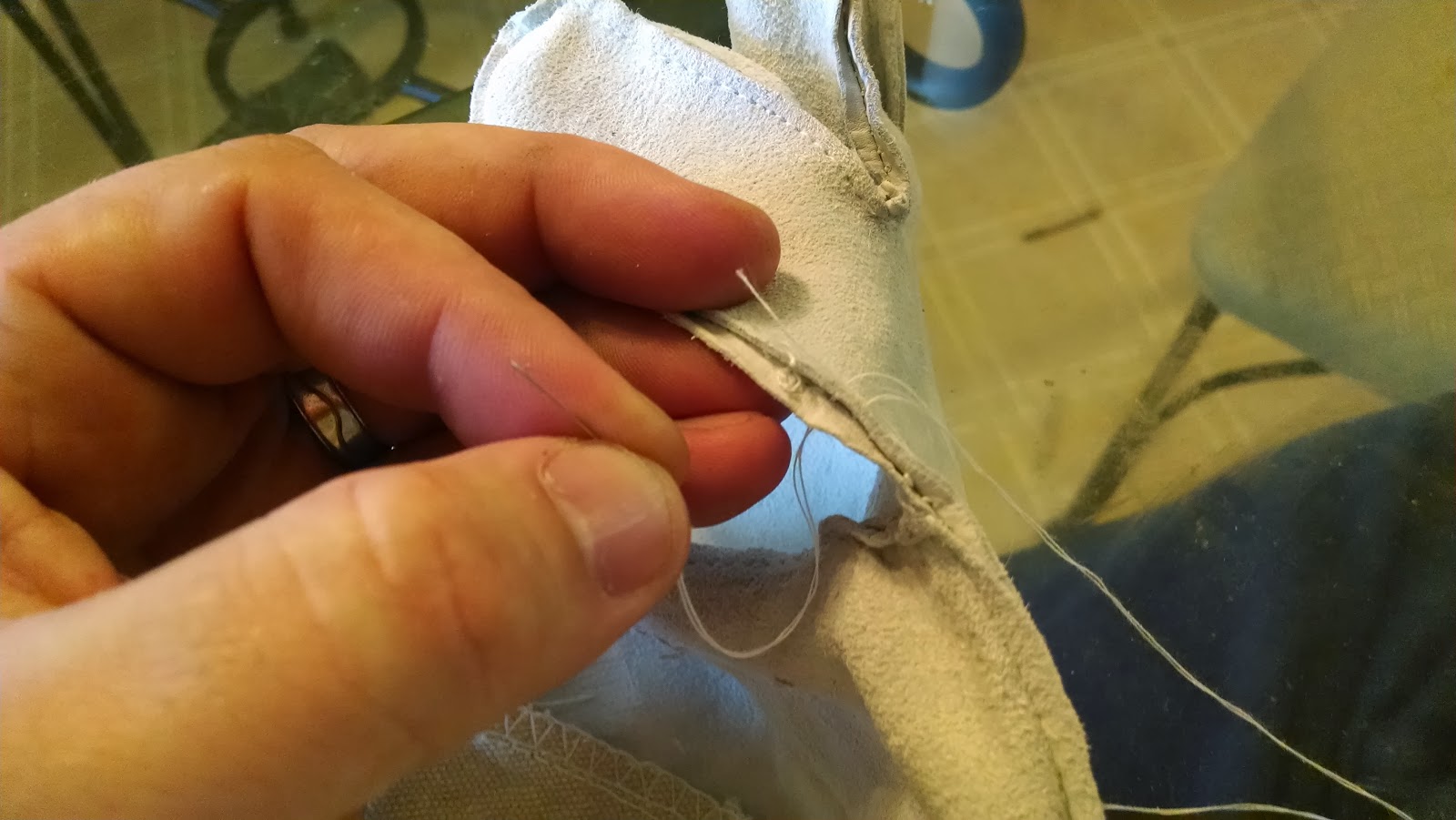 Luckily, Danielle had some thread in her sewing box. 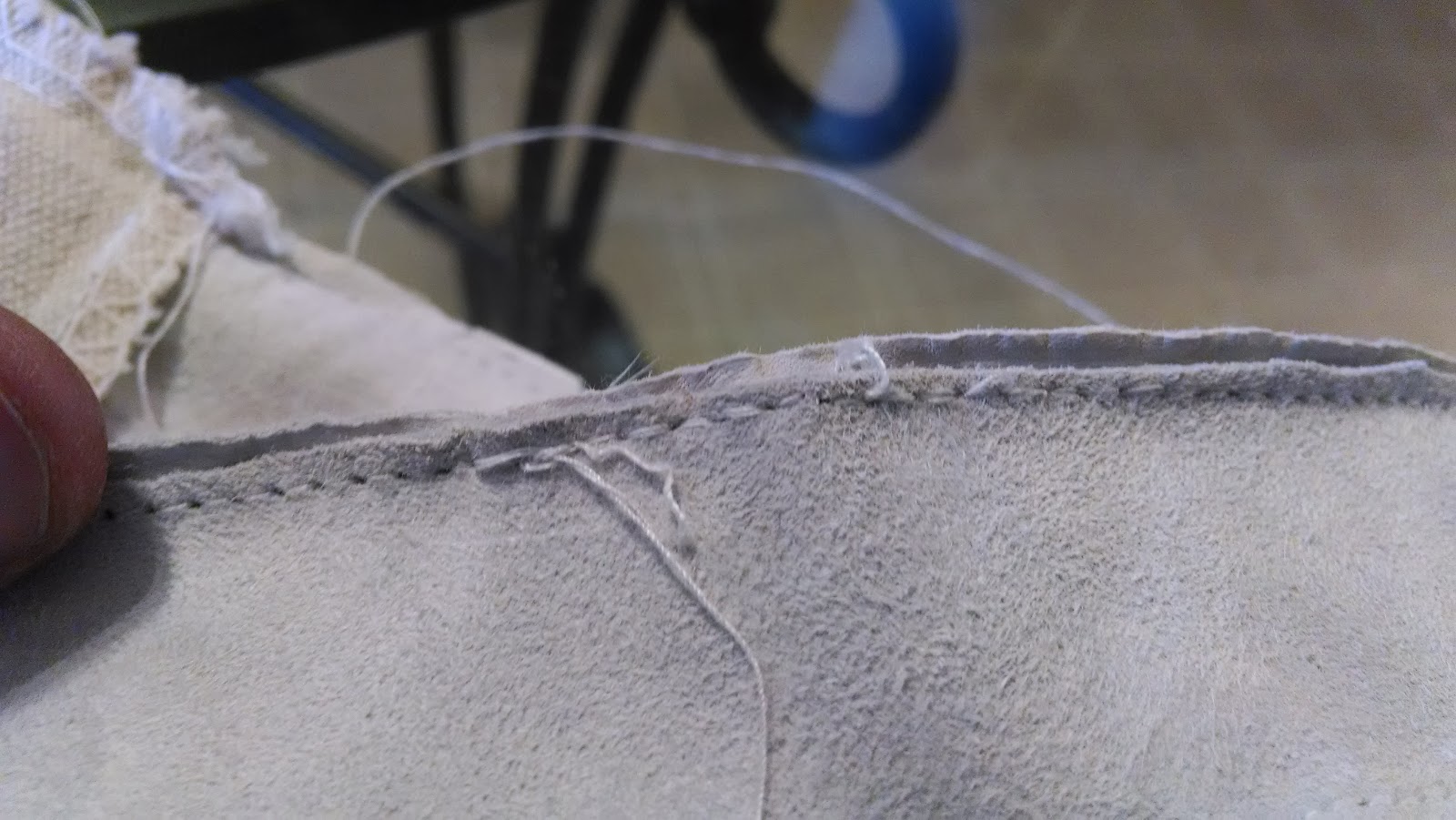 The holes were already there and I didn't know if our sewing machine could sew through leather.  I decided to just line the holes up and push the needle through the holes their machine made.  About fifteen minutes with the needle and......... 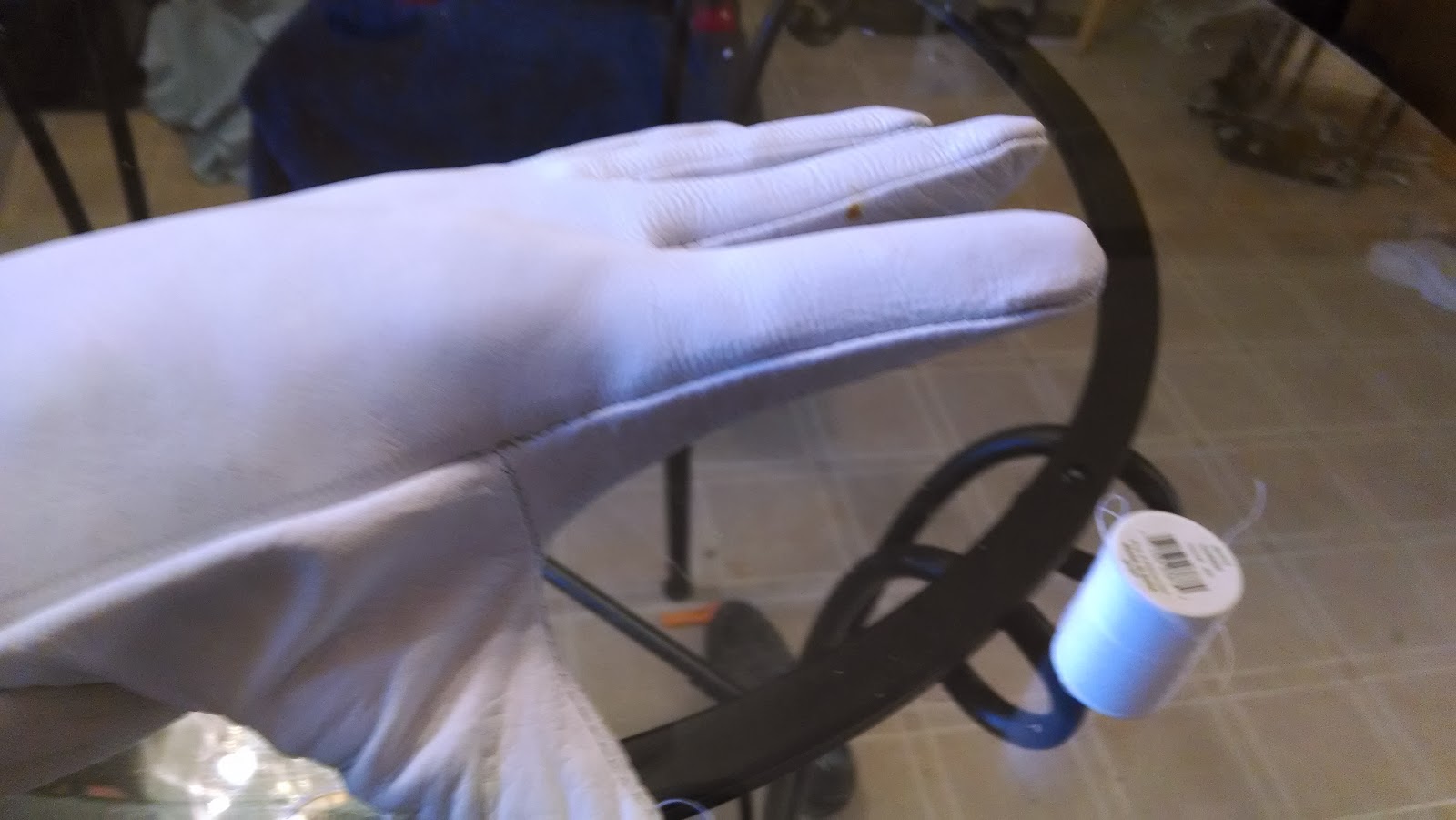 It's that time of year again.  Time to start the seeds in the garage.  Actually it was supposed to be 2 weeks ago, however we were a bit busy getting ready for the AWANA grand prix.  I ordered seeds from Terroir Seeds this year (www.underwoodgardens.com).  However, upon looking through the seeds in my box I realized I still had a LOT of tomato seeds from the past few years.  I decided to hang on to the new seeds and planted last years stock.  We planted plenty of extras to compensate for the lowered germination rate of the old seeds.  We'll see how it works out. 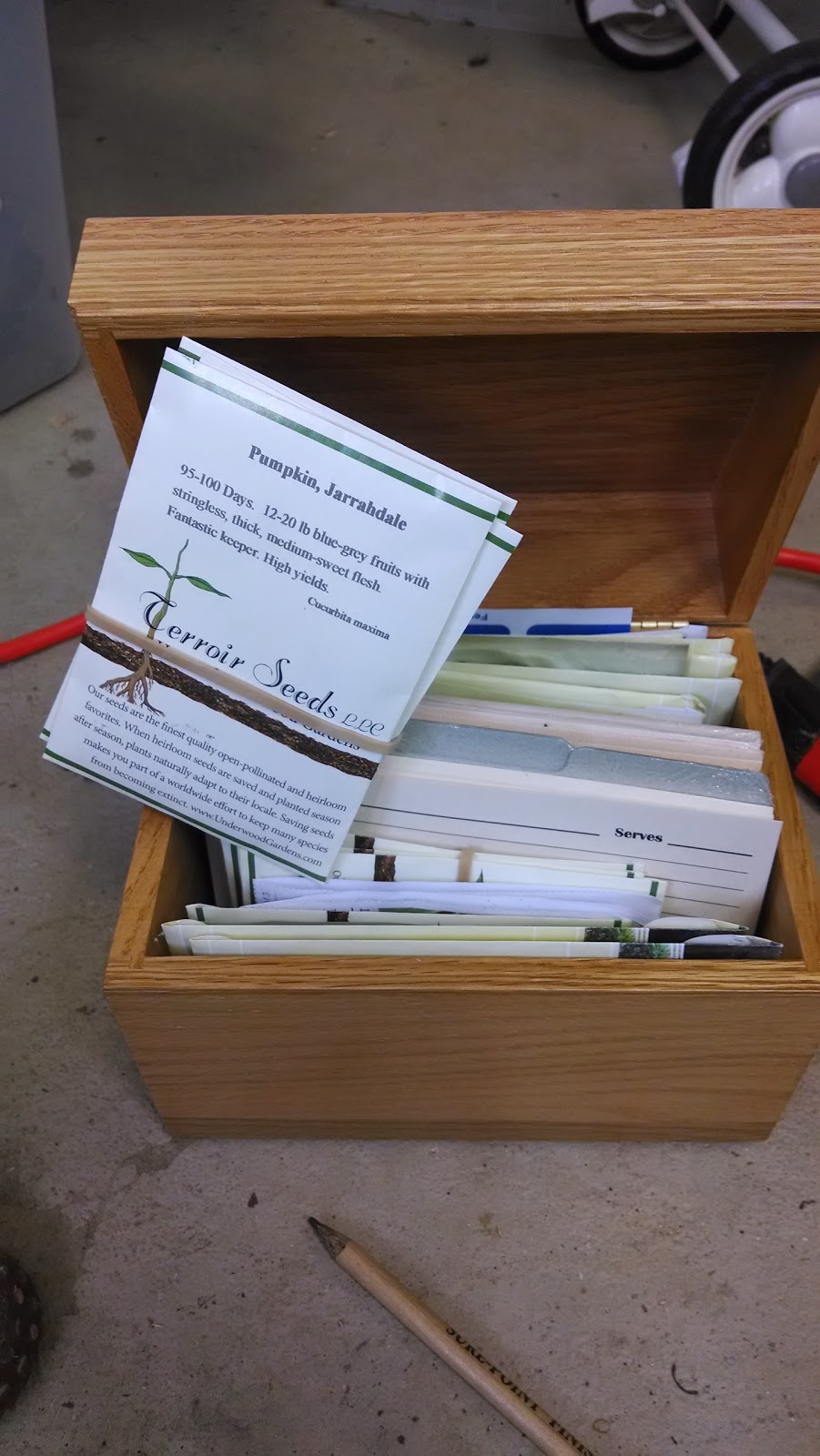 Two years ago I used peat pots to start the seeds.  At the end of the year I was pulling complete pots out of the ground.  They didn't break down at all.  Last year I mixed up a fancy soil mix and made soil cubes.  It worked pretty well, however it was time consuming making all those soil blocks.  You also had to be real careful when watering them to not erode the block away.  This year I'm going back to my dad's method.  Get wax coated dixie cups from the store, poke holes in the bottom, fill with miracle grow potting soil, insert seeds. 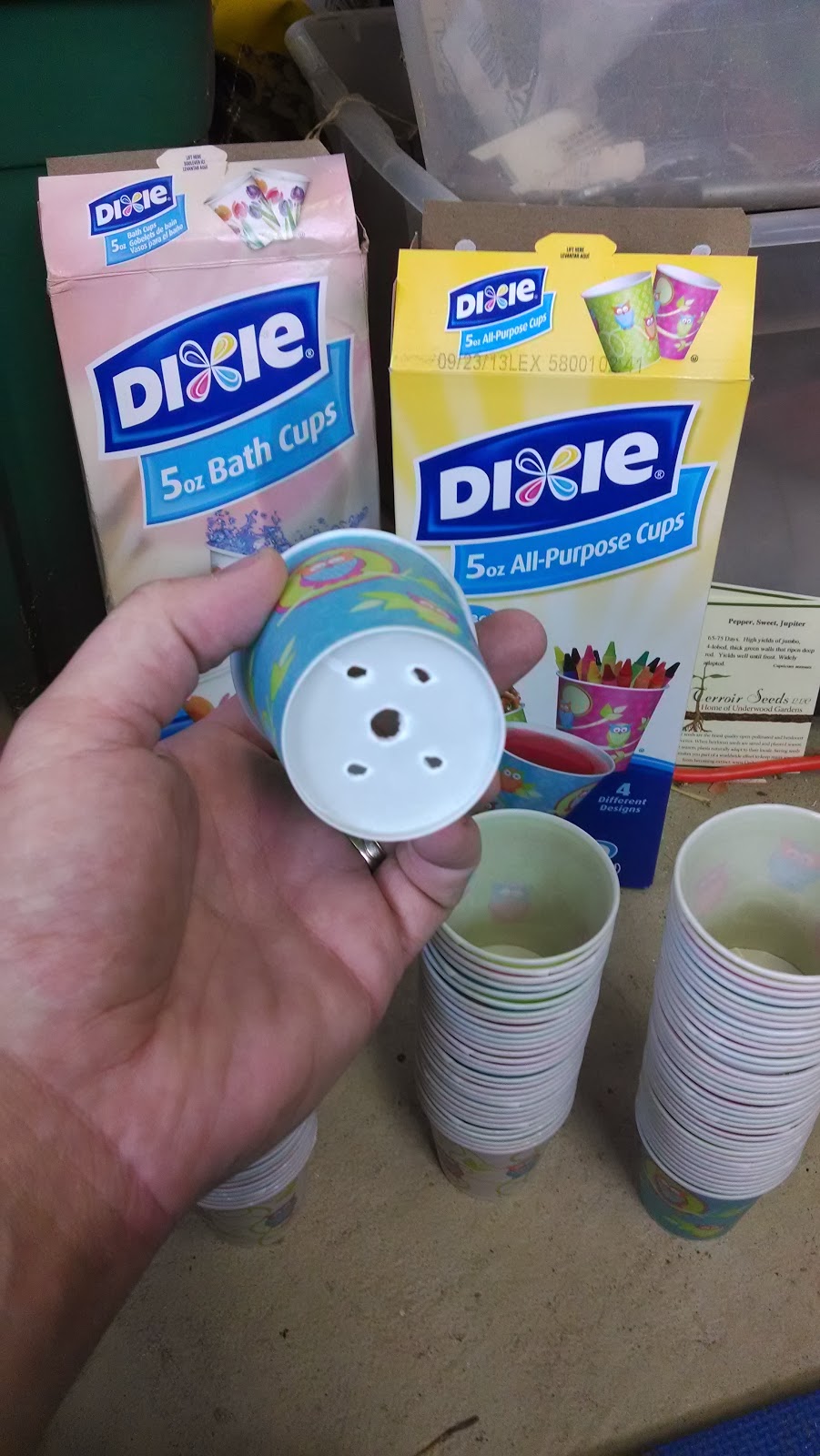 We planted 128 Irish Paste seeds in 64 Dixie cups.  Lillie helped so I'm sure we will find an odd plant here or there.  We also planted 16 green pepper cups and 16 jalapeno cups.  They are all currently in the garage under the florescent light. 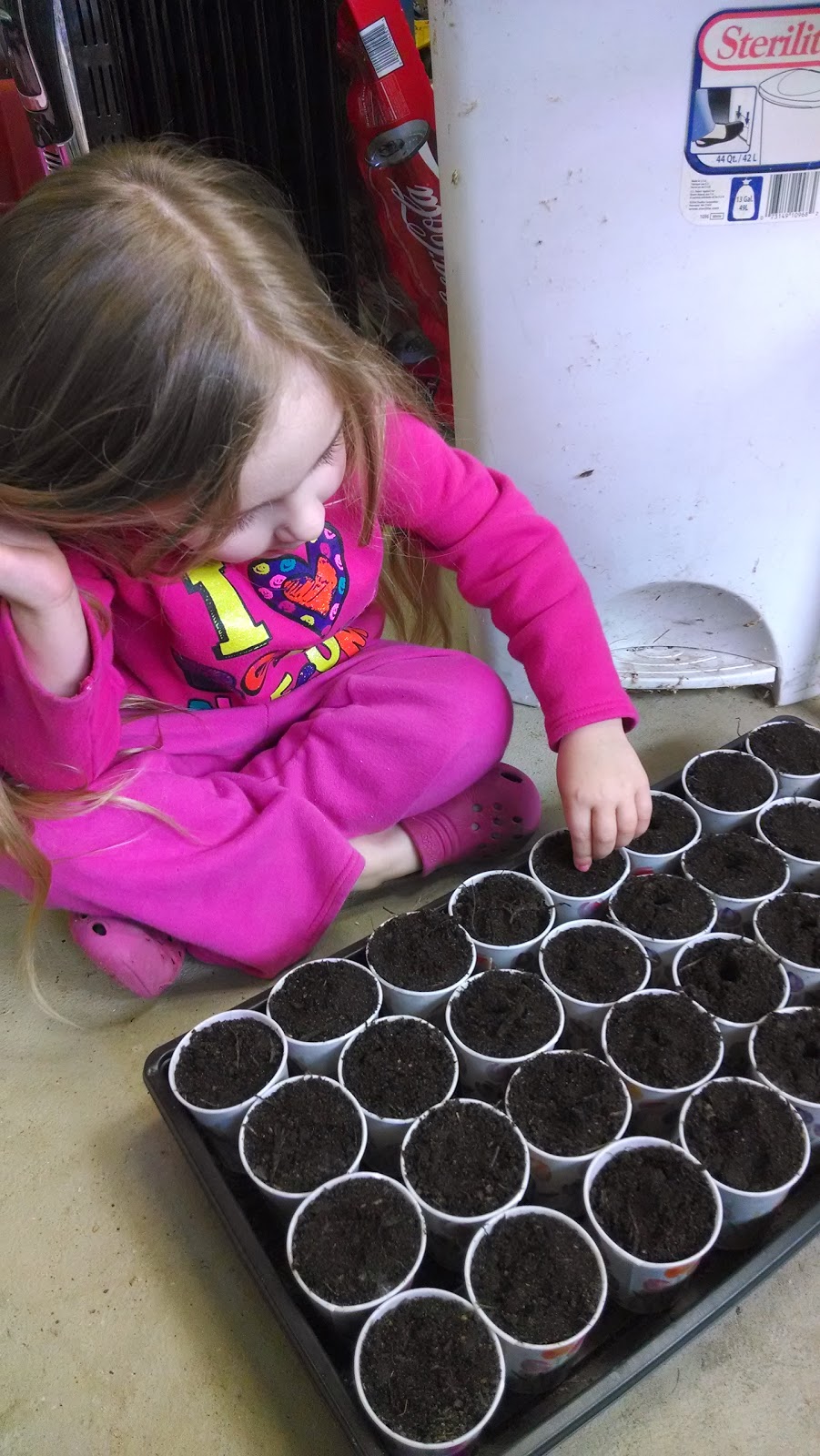 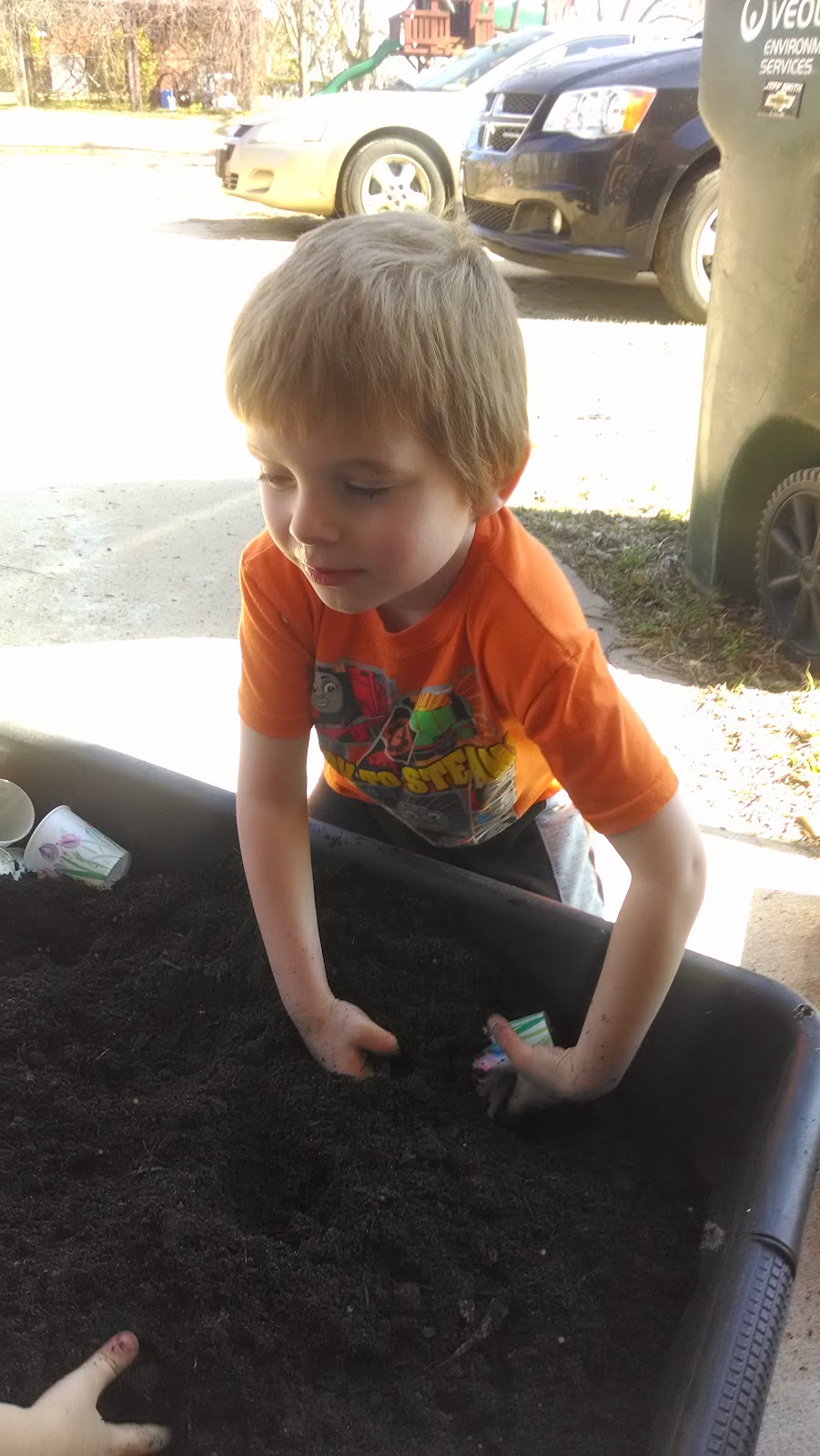 The cars are finished and ready to race! 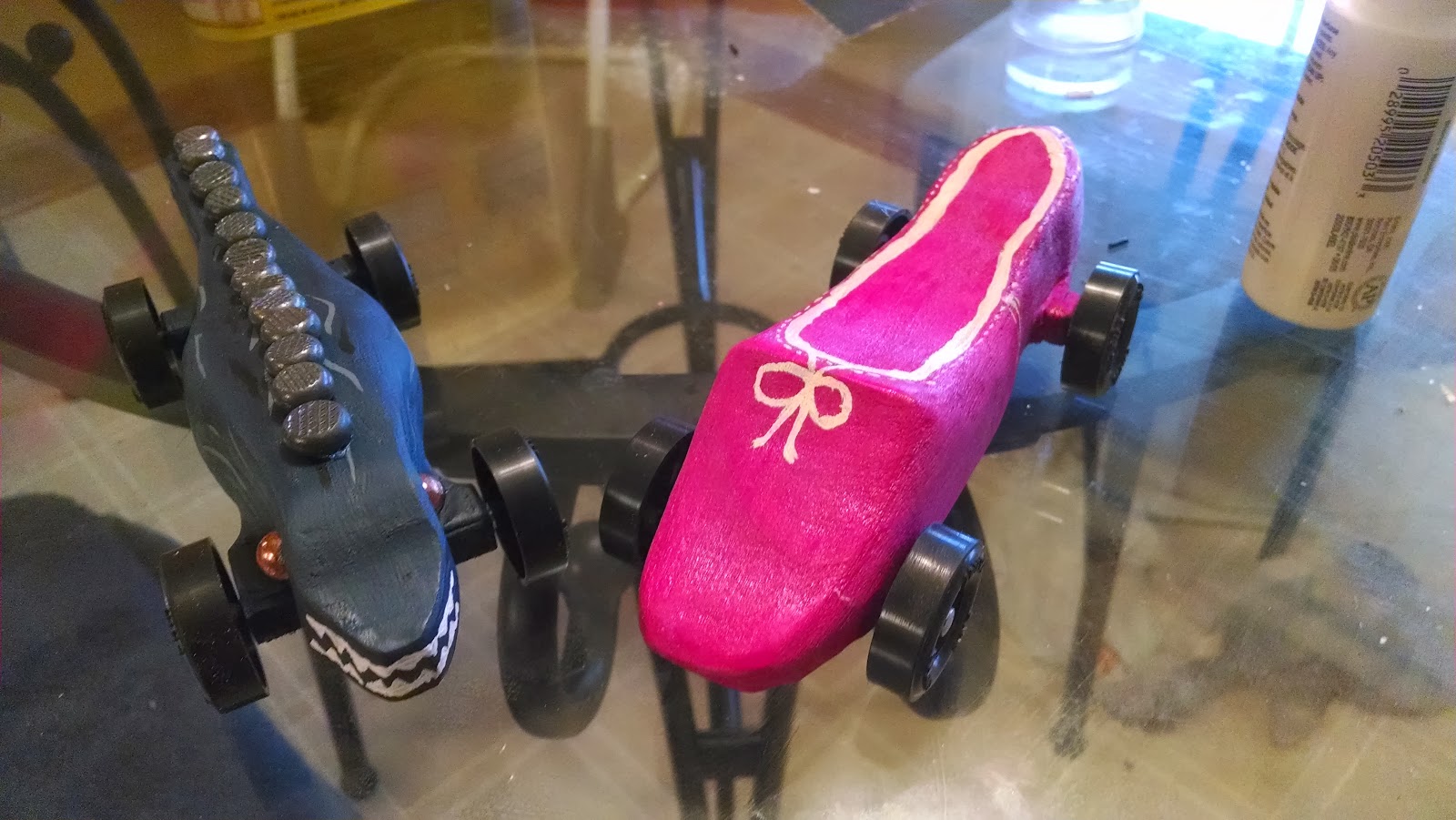 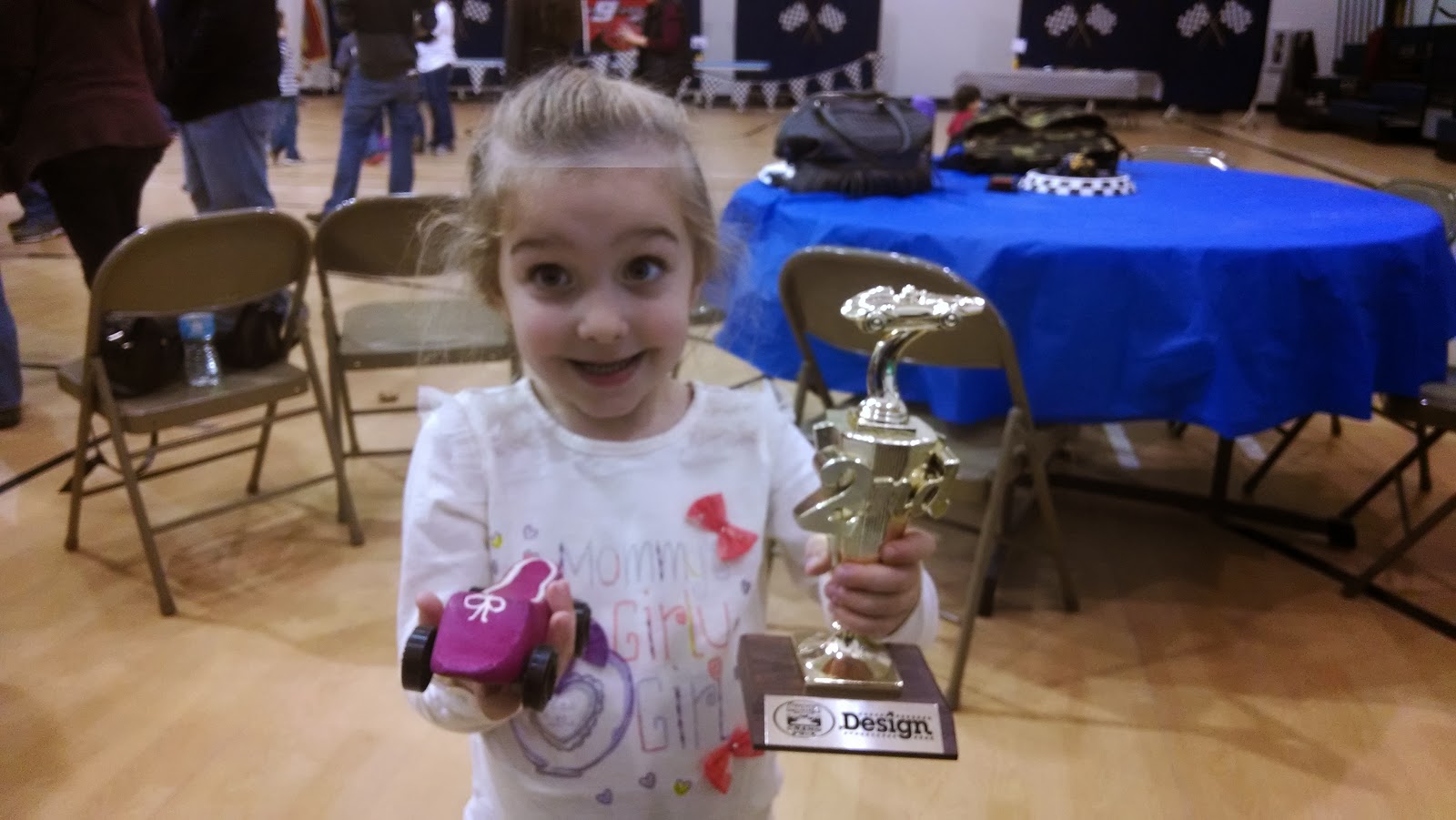 While their cars didn't win any actual races they had fun building them with dad.
(we did get a close second on one race) 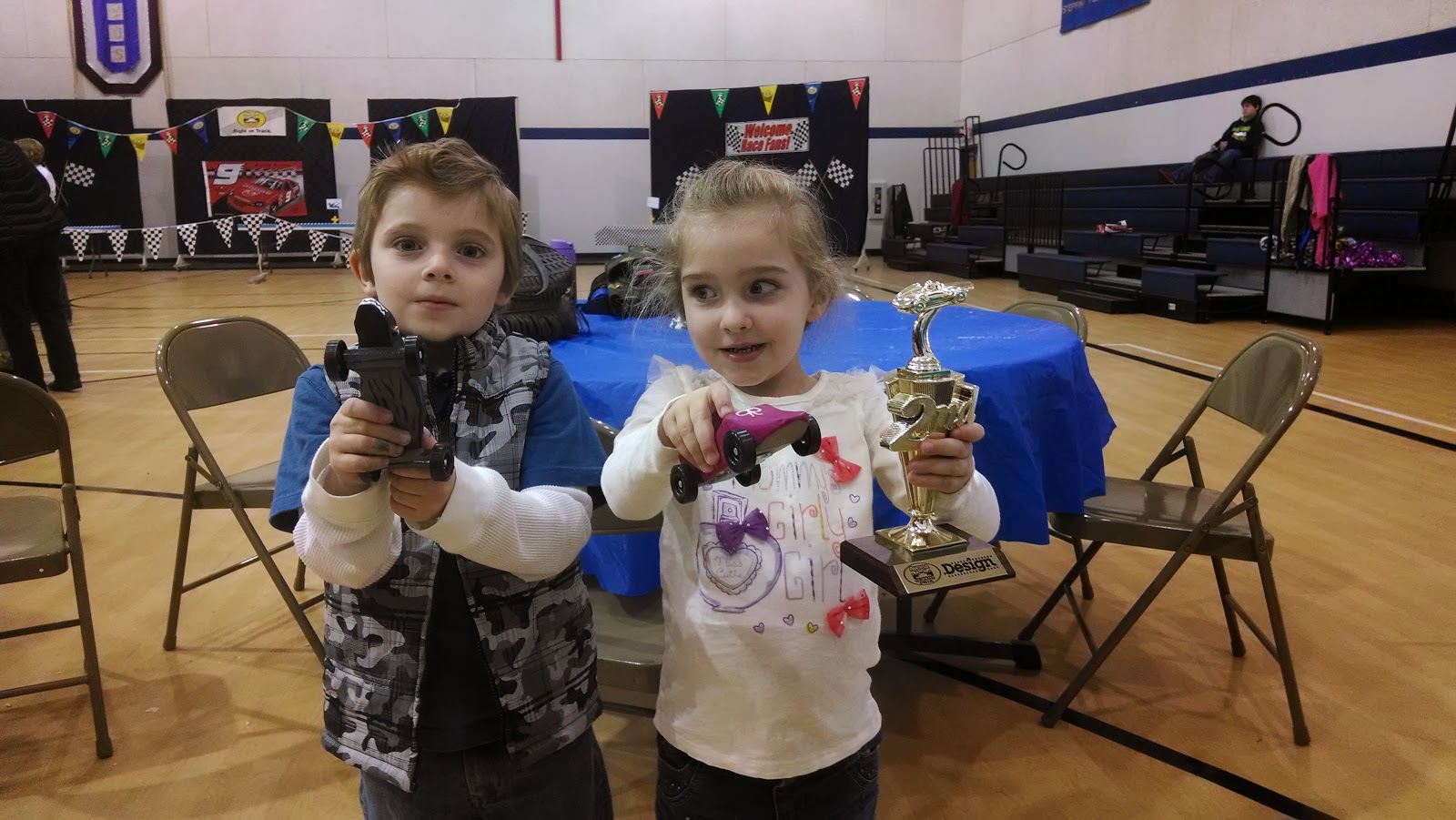 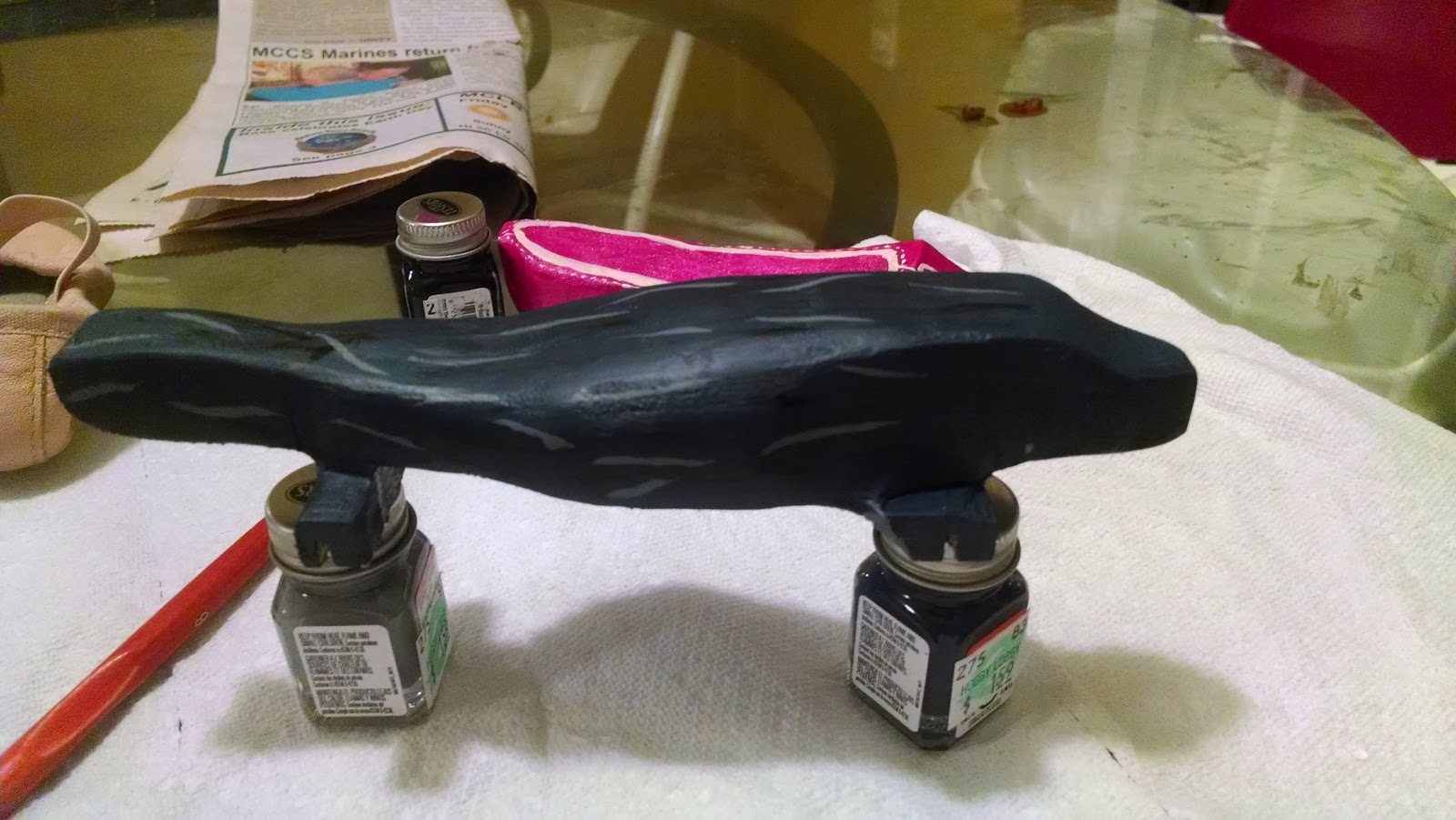 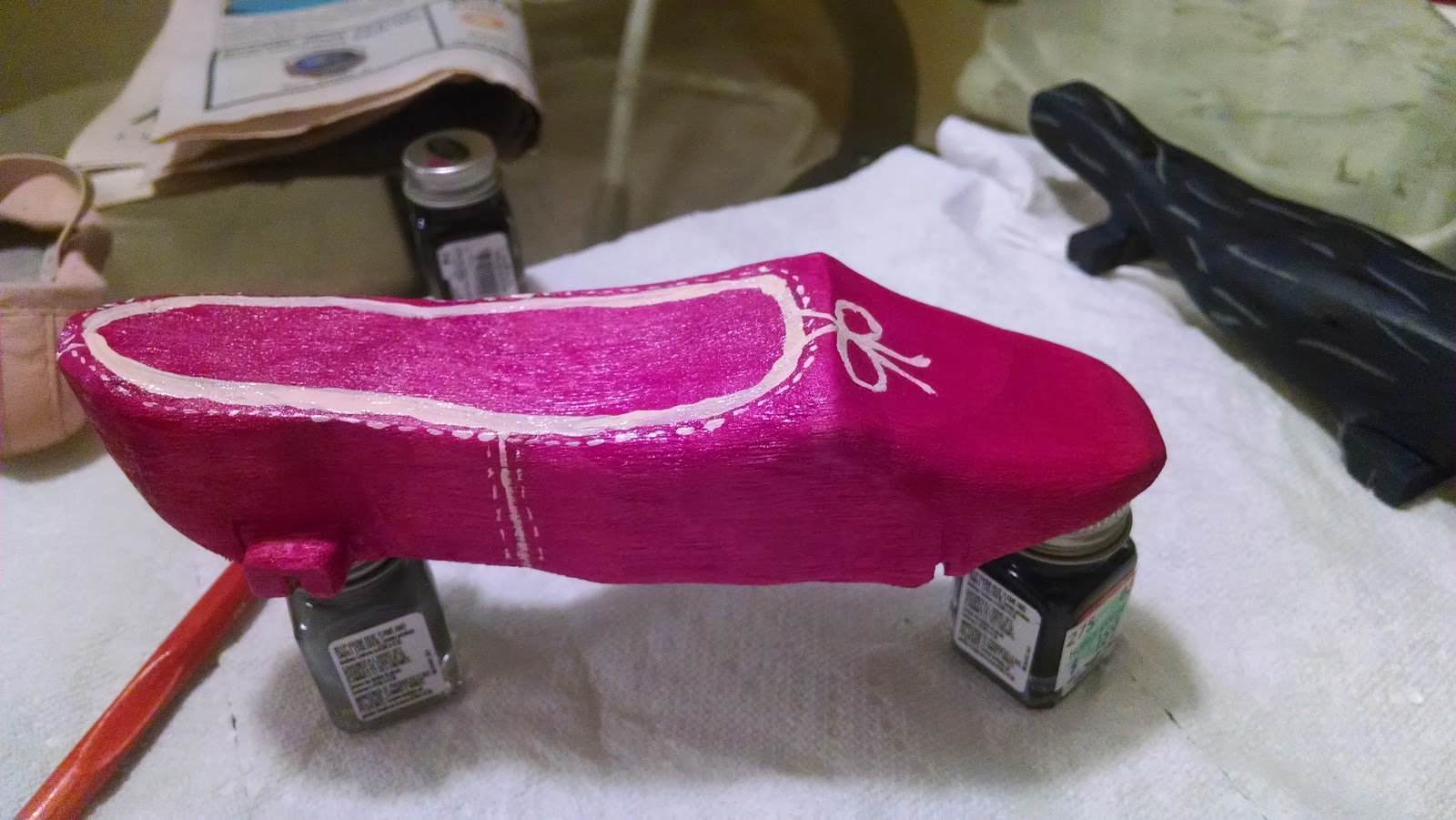 Our first AWANA Derby is this year.  I asked Logan and Paige what kind of car they wanted.  I was thinking they would say "a race car" or "a truck".  They came back with "a mozasaur" and "a ballet shoe"  this is the result -wheels.
Posted by Jesse at 20:50 No comments: